Murder Before Evensong by Richard Coles (Weidenfeld & Nicolson, £16.99)
The first in a projected series from the pop star turned vicar and memoirist, Murder Before Evensong is set in the late 1980s in the English village of Champton. This enjoyable cozy crime novel contains all the requisites: a social hierarchy ranging from aristocrats to semi-feral woodland dwellers; lashings of afternoon tea and parish intrigue; charming farts; and a body in the church. There’s plenty of fascinating liturgical business, although clergyman sleuth Canon Daniel Clement, a mildly exasperated but accommodating type with little hinterland, does not, as yet, make much of an impression. We initially encounter him using a biblical text to persuade his congregation of the necessity of installing a toilet at the back of the church. This becomes the focus of a debate about the perils of upending the status quo and leads to a series of fatal events. The appropriately named DS Vanloo duly investigates, but the revelatory manner of the ending is religiously apt rather than convincing.

Tokyo Express by Seichō Matsumoto, translated by Jesse Kirkwood (Penguin Classics, £12.99)
The railway mystery is another staple of golden age crime fiction, and this tale of timetables was the debut novel of bestselling writer Seichō Matsumoto (1909-1992). First published in Japan in 1958 and never out of print, it’s being reissued in the UK in a new translation. When ministry official Kenichi Sayama and waitress Toki Kuwayama are found dead in a cove on the island of Kyushu, next to a bottle that appears to have held cyanide-laced juice, it is chalked up as a lovers’ suicide pact. However, neither local detective Jūtarō Torigai nor his Tokyo-based colleague Kiichi Mihara buy this explanation: the pair were witnessed boarding the train from the capital the day before their bodies are discovered and anomalies keep piling up, and the ministry where Sayama worked is mired in a corruption scandal. No revelations here, but intuition coupled with dogged detective work and a palpable sense of frustration, as the two men go back and forth along the line – maps and diagrams provide clarification – trying to solve the mystery in this ingeniously plotted story.

Wake by Shelley Burr (Hodder & Stoughton, £14.99)
This outstanding debut from Australian newcomer Burr is set in the outback town of Nannine in the parched landscape of rural New South Wales. When Mina McCreery was nine years old, her twin, Evelyn, was kidnapped; 19 years later, the million-dollar reward her late mother put up for anyone who could find her is still unclaimed. The traumatized and defensive Mina now leads a reclusive life on the family’s isolated farm and the case, which generated intense media interest, continues to be debated with gusto on internet forums for armchair crime-solvers. When private investigator Lane Holland offers Mina his services, his stated interest is the reward, but he has an ulterior motive and a connection with Nannine that he has not shared with her. With a slow build and complex characters, this is both a well-plotted, gripping mystery and a sensitive exploration of the aftermath of trauma.

Sun Damage by Sabine Durrant (Hodder & Stoughton, £16.99)
Set in the south of France, Durrant’s latest novel is the tale of Ali who, after a “shitshow” childhood and late teens spent swindling gap yah kids in India, is taken up by older, more experienced and very controlling con artist Sean. By the time the pair have scammed their way through several countries, Ali has come to distrust and sometimes fear her mentor, and the morally queasy nature of their enterprise is getting to her. In the French Riviera, fresh-off-the-plane Lulu seems the perfect mark, and Ali reluctantly complies with Sean’s plans – but when things go badly awry, she escapes with €260,000 of his money and Lulu’s luggage and identity, replacing her as cook for a bunch of rich holidaymakers at a villa. Hoping not to be rumbled, or discovered by Sean, she wants a new start but is always looking over her shoulder … Claustrophobic and suspenseful, with an engaging narrator and a satisfying twist: perfect poolside reading.

aurora by David Koepp (HQ, £14.99)
This exciting, Michael Crichton-type thriller from American screenwriter Koepp (Carlito’s Way, Jurassic Park) posits a geomagnetic storm hitting the Earth and leaving most of the planet without electrical power. Everything from communications and lighting to refrigeration and supply chains abruptly ceases, and, with food and fuel becoming scarce, law and order begins to break down. Tech billionaire Thom Banning retreats with his family to a specially purchased desert bunker in Utah, but he’s reckoned without the human element, and things don’t go according to plan. Meanwhile, in the Illinois suburb of Aurora, Thom’s sister Aubrey, completely unprepared and saddled with a sulky teenage stepson, is using her wits to survive – while her deadbeat former husband is doing his best to profit from the catastrophe. This is a one-sitting read, tightly plotted and atmospheric, with characters you’ll invest in as the world around them spins out of control. 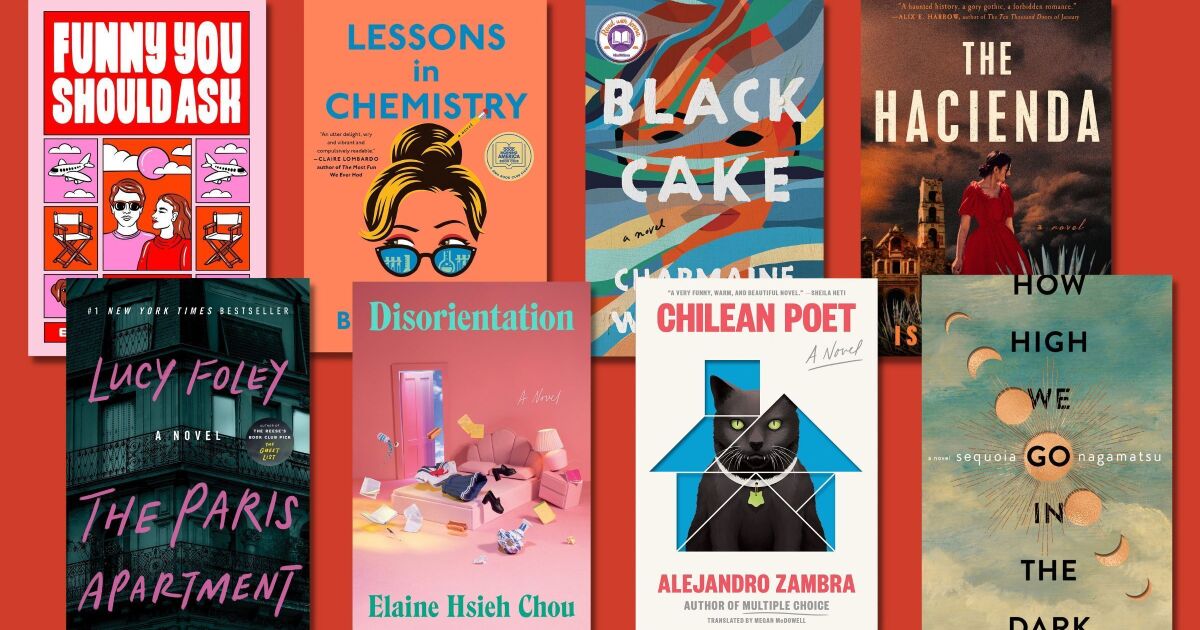